Our Annual General Meeting is chance to meet other members of the local party and the officers. We have a guest speaker, Emily Davey, to lead a discussion on next year's elections for London's Mayor and Assembly. There is also some formal business to conduct, described below, not least selecting the Executive Committee for next year!

We meet in Wandsworth's historic Quaker Friends' Meeting House, opposite the Town Hall. 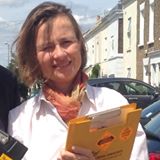 Emily is number 2 on the Liberal Democrat list for the London Assembly. She is best known for her campaigning on housing - such a vital issue both here in Wandsworth and across all of London. She is a fund of expert knowledge and interesting ideas, and will make a fantastic assembly Member.

We take reports from the Chair, Treasurer and Conference Representatives, and also review the accounts for 2014. This is an opportunity to ask questions about what the local party has been up to.

And we also take nominations for the 2016 Executive Committee and Conference Representatives. These are as follows:

Since the party's constitution was amended to incorporate One Member One Vote, any member that registers at Conference has a vote. This diminishes the role of Conference Representatives. However we are advised that we should still select them. This is because, as things now stand, they elect people to the Federal Committees.