"The growth in membership is phenomenal - our new members are sick of Brexit, sick of our country being run into the ground and are joining from Labour and the Tories or as first time members of a party because they want to stop Brexit and save Britain. They are active and ready to join our liberal movement to fight for all of our futures."

Mark Gitsham is a Battersea resident, where he has lived with his partner for over 5 years. He became actively involved with the Lib Dems during the referendum campaign in 2016 and stood for Wandsworth Council in 2018. He has worked with homeless people and young offenders, assisting them back into homes, work and training. Mark was part of the organising committee which delivered the London 2012 Olympic and Paralympic Games.

"I am excited about our highest ever levels of membership in Tooting not just because it shows the determination of so many to stop Brexit. It also shows how so many people want to help deliver the Liberal Democrat's bold vision on climate change, community policing and housing".

Olly lives in Balham. As well as a successful career in public transport, Olly has a long record of volunteering and public service: he currently volunteers as a visitor supporting people living with motor neurone disease. Born to a Polish mother and a British father, Olly shares and understands the pain caused by Brexit to EU and British citizens alike.

Spikes in member signs-ups are prompted by events such as Jo Swinson’s election as the party’s new leader last month. Boris Johnson arrival in No. 10 also sparked a membership surge as did the party's by-election victory in Brecon & Radnorshire, which saw Jane Dodds beat Conservative incumbent Chris Davies.

Recent polls have suggested that the Liberal Democrats could win Putney from the Conservatives at the next General Election. Meanwhile polls show that Labour voters are growing increasingly frustrated with Corbyn's fence-sitting on Brexit and are dismayed by his handling of anti-semitic behaviour in his party. 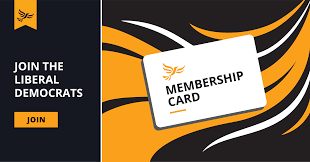